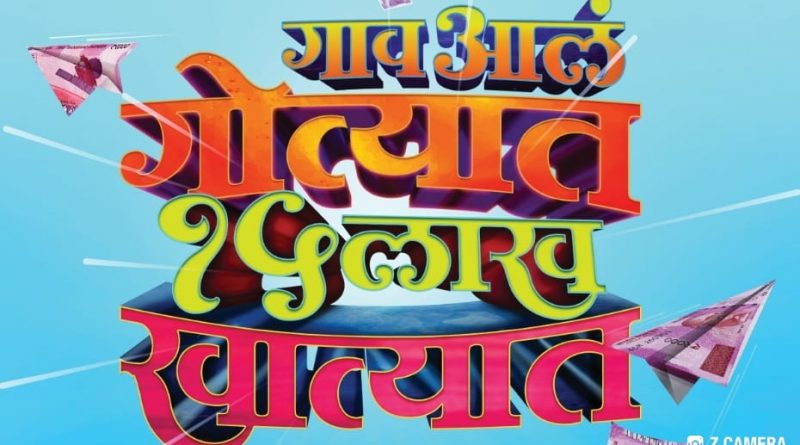 Marathi Cinema abounds with titles which are different and also show a ray of hope. This is one of the reasons that all over the world are keen in Marathi films. Right from the title till its out of the box content, the film “Gaon Aala Gotyat 15 Lakh Khatyat” is all set to release very soon. Announcing the film, the director Shubham Ray has unveiled its creative title on social media recently. The title by itself indicates that there is something which is very humorous in store for the audiences. The title creative of the film is sure to impress one and all.

The audiences will be able to see a sagire in the film “Gaon Aala Gotyat 15 Lakh Khatyat” which is being made under the banner of Zira Film Productions. The film industry is considered to be the mirror of society and hence a film always sets out to reflect whatever is happening day to day in the society. The film “Gaon Aala Gotyat 15 Lakh Khatyat” is no exception to the prevalent rule. Director Shubham Ray reiterates that through this film he will drive home the nexus between the mindset of the audiences and then prevalent happening in the society. Shubam adds that since the film is an out and out satire, he is confident that whatever be the age of the viewers, each and every one will laugh to his or her heart’s content when he or she sets out to watch the hilarious film.

The star cast of the film comprises Prakash Bhagwat, Priya Gamre, Sanjivani Jadhav, Virag Jakhad, Dr. Vilas Ujawane, Rangrao Ghagre etc. Nikhil Kamble is the DOP of the film while Virag Jakhad is the art director. The Muisc has been done by Music Director Sameer Sonu while Hemant Palkar has done the makeup as well as hair designing. Ashwini Chandrikapure has handled the choreography for the film while Rani Wankhede has looked after the designing of the costumes. The film “Gaon Aala Gotyat 15 Lakh Khatyat” is all set to release very soon.