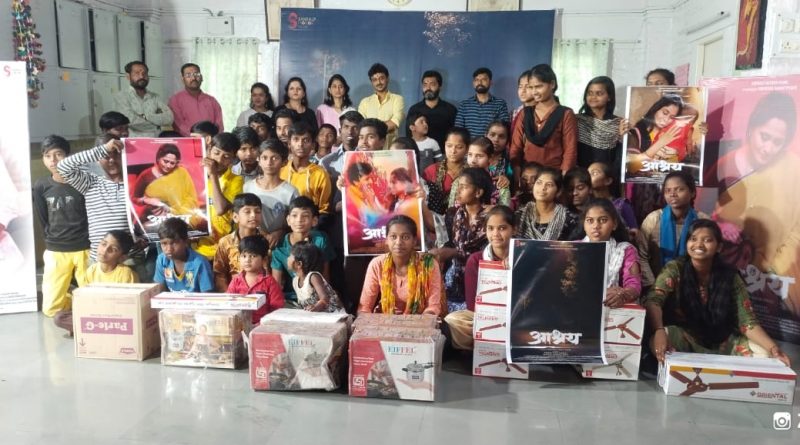 Many films are entertaining as well as socially conscious and convey an important message to the audience. Some films, however do not stop there, but also present a new example to society through their actions. According to the saintly verses, ‘Anubhave aale anga, te ya jaga det aso …’, some movies not just talk about it but also take direct initiative and start working. The upcoming Marathi film ‘Aashray’ is one of them. The team of the film ‘Aashray’ has set an example for Marathi cinema by extending a helping hand to Maher. By spending the whole day with the people of Maher, the team of this film made a successful attempt to put a smile on their faces.

‘Aashray’ presented by Sankalp Motion Films and produced by Abhishek Sanjay Fade. The team of ‘Aashray’ cinema visited a social organization named Maher, located at Vadhu Budruk in Pune district. In 1997, Sister Blueso Kurien founded Maher in Vadhu Budruk, an organization working for the society. Maher, an inter-religious and caste-free Indian organization, has extended a helping hand to the common people by doing social work in various fields to date. The team of ‘Aashray’ visited Maher, which is currently a shelter for about 1200 people, and worked to increase their enthusiasm. The ‘Aashray’ team also gave Maher, gifts in the form of fans and cookers. On this occasion, the team of ‘Aashray’ spent the whole day with the members of Maher, chatted with them, and also entertained them. A new poster of ‘Ashray’ was also released on this visit, justifying the Maher visitors giving shelter to orphans. Ramesh Kashinath Chaudhary, Vikram Bhujbal, Prashant Gaikwad, Maya Shelke on behalf of Maher organisation, while producer Abhishek Sanjay Fade, lyricist and singer Aarti Abhishek Fade, director Santosh Sahebrao Kapse, screenwriter-dialogue Dixit Saravde, artist Amay Barve, Swati Pagar, and Ganesh Satale etc. were present on behalf of ‘Aashray’ film.

Maher, who is leading the way in raising girls, has always taken the initiative to prevent girls from begging. Maher has become a household name for parents who are unable to take care of their children. While paying attention to the school, health, meditation, art, personal development, etc., the responsibility of care and their upbringing has also been accepted of such children. Maher, who works for women, has a big role to play in providing shelter to women victims of domestic violence, unmarried pregnancies, widows, and dowry.