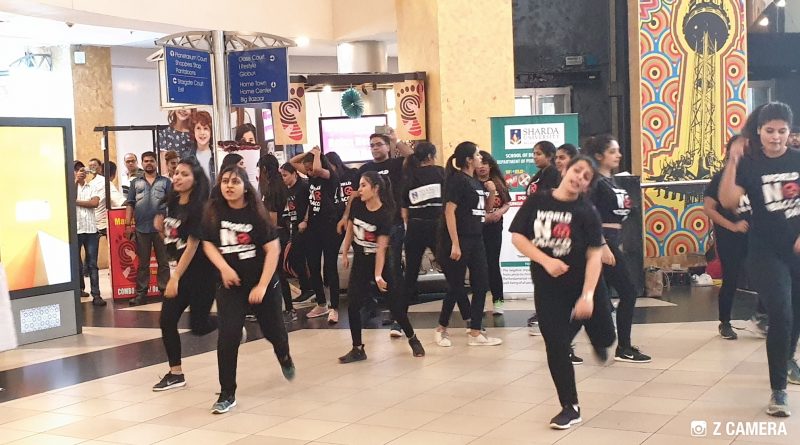 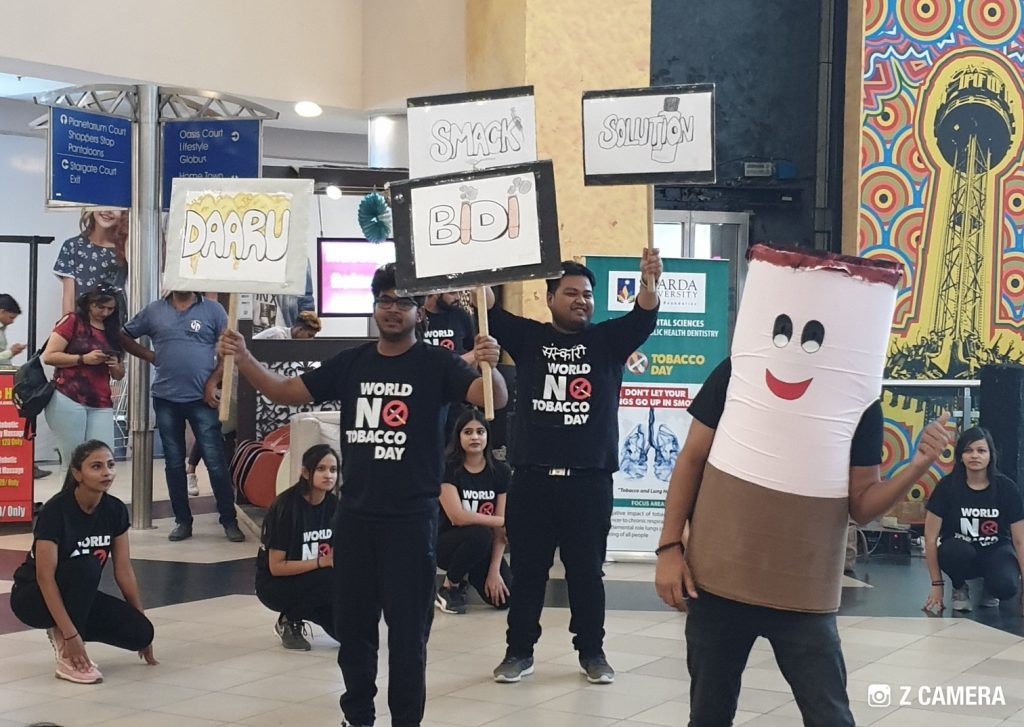 A special initiative to engage people in raising awareness against Tobacco due to its harmful effects on health, family and society
Keeping in mind the increasing concerns around health issues arising out of tobacco consumption, the Department of Public Health Dentistry at School of Dental Sciences, Sharda Universityinitiated an awareness campaign on the occasion of World ‘No Tobacco’ Day’. As a part of the campaign, students and faculty from Sharda University carried out a series of awareness initiatives that included Plays, Stand-up skits, Dance shows and Flash Mobs at the Great India Place in Noida. These programmes were aimed at informing people about how tobacco consumption can have adverse effect on health, along with the description of variety of treatments modalities and remedies. 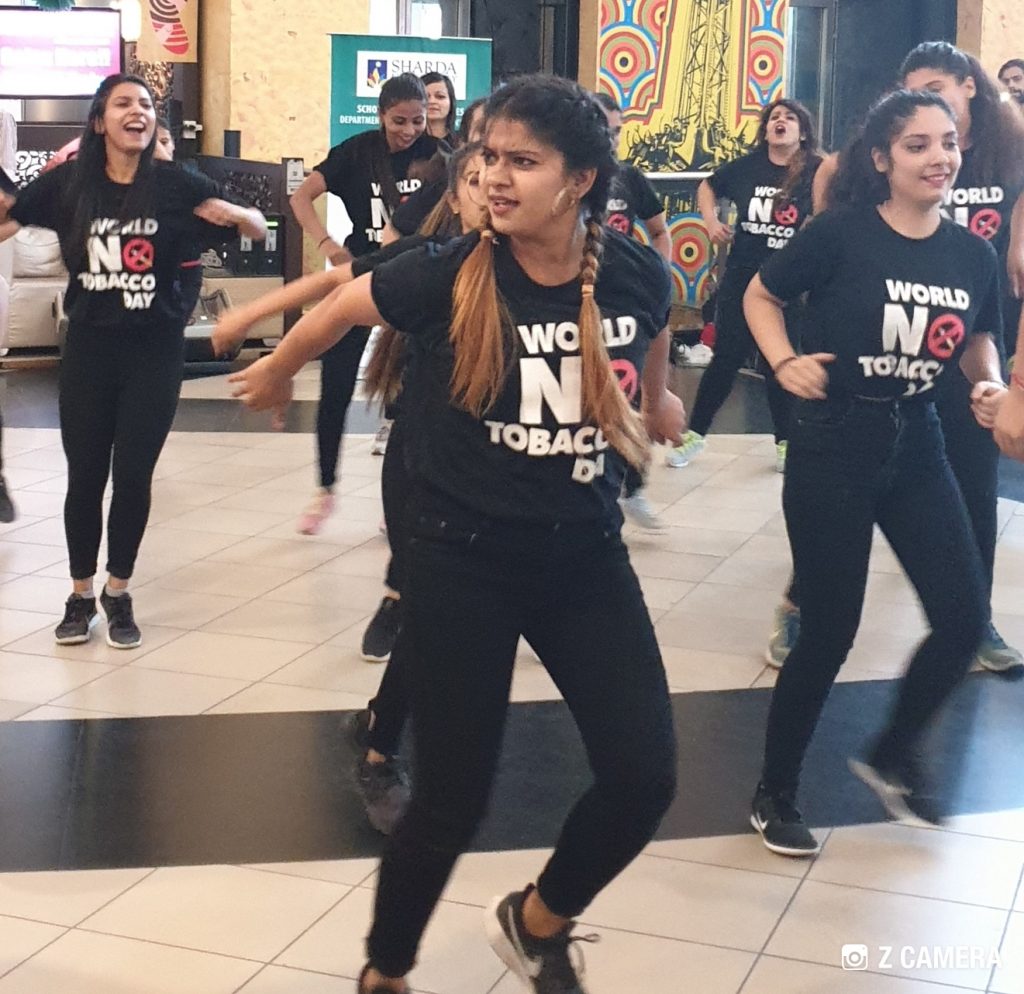 The impact on the health of an individual by passive or active intake of tobacco is inevitable and with the ever-increasing number of deaths each passing year due to tobacco consumption, such awareness and motivation campaigns have become the need of the hour.

Talking about the initiative Dr Swati Sharma, Staff Incharge, Department of Public Health Dentistry said “In India alone, tobacco consumption leads to around 10 million deaths each year and makes many more a victim of its associated morbidity. The use of tobacco leads to dangerous health disorders including lung cancer, oral cancer, chronic respiratory tract disorders etc, so the need to spread awareness against the use of tobacco has become quite essential. The Department of Public Health Dentistry, School of Dental Sciences has been conducting such awareness campaigns and public safety initiatives to convey the dangers of tobacco. Our students and faculty members have been reaching out to people and organising health check-up camps and workshops. So far we have reached out to 40,000+ people across more than 12 cities in India.” 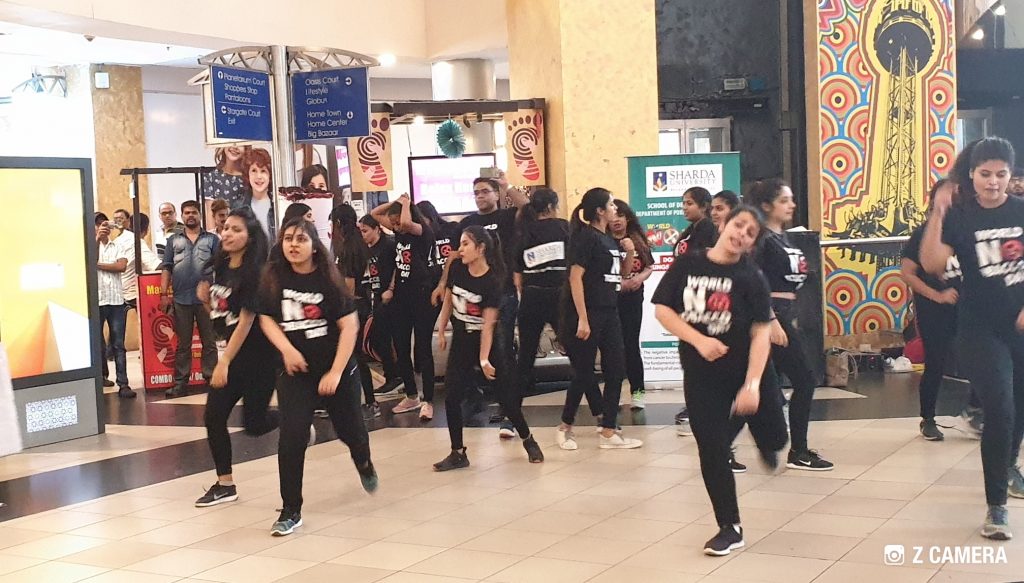 Sharda University has been raising its voice against Tobacco and the ill-effects of its consumption since its inception in 2006 by supporting the “World No Tobacco Day” initiative of the World Health Organization (WHO) on 31st May every year.

The campaign witnessed a footfall of 2000+ from the audience with people joining in as the dental team danced to the popular English song: “We Will Rock You”. An interesting aspect of the campaign was the presence of a cigarette mascot and a popular comic figure ‘Iron Man’ who rescues the world from the deadly ashes of tobacco. In the act, Iron Man symbolized self-control and will power – two key attributes required to quit this habit.

As a part of the next phase of this Community Social Responsibility (CSR) initiative Mr. P K Gupta, Chancellor, Sharda University, Mr Y K Gupta, Pro Chancellor, Sharda University are providing their full supporting and Dean SDS, Dr. M Siddharth, and his team of 50 students and interns along with faculty Dr. Swati Sharma, Dr. Alankrita Chaudhary, Dr. Kuldeep Dhanker and Dr. Sahil Thakar, will be taking the campaign to other parts of the state.

The Sharda Group of Institutions (SGI) has been the provider of world class education since 1996. Sharda University is a leading educational institution based out of a 63-acre sprawling campus in Greater Noida, Delhi NCR. A venture of the renowned Sharda Group of Institutions (SGI), the University has established itself as a high-quality education provider with prime focus on holistic learning and imbibing competitive abilities in students. Sharda University has more than 180 tie-ups with global universities such as, Middlesex University, London, King’s Western University, Canada, Missouri State University, Sacred Heart University, Ural Federal University, and University of Ljubljana which are beneficial for both students and the faculty. It is the largest educational group based in Uttar Pradesh, having 20,000+ students from 80+ countries and 1200+ faculty strength. More than 350 corporates have visited the university this year with 37,500+ students placed so far in various multinational companies. It also has 47,500+ alumni network who are today leaders in their respective realms