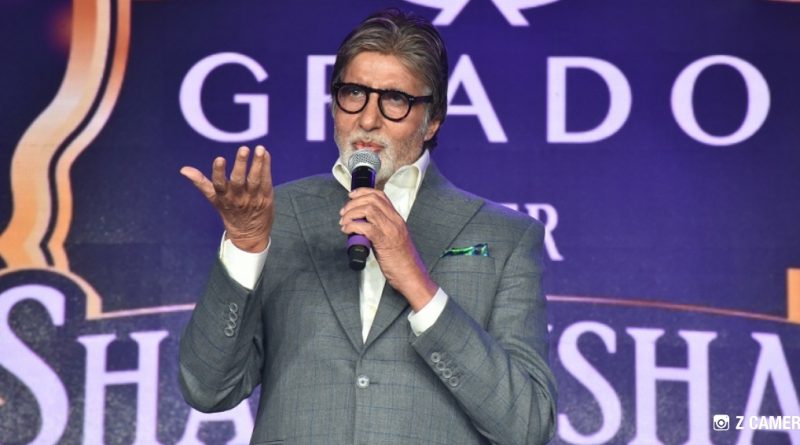 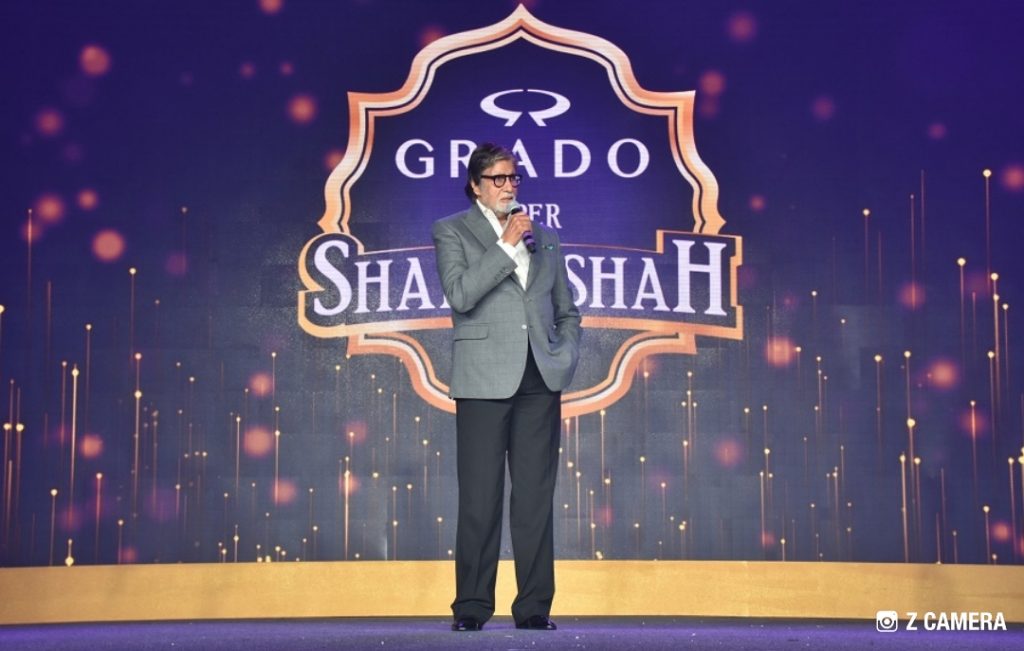 The event was held to celebrate GRADO’s association with the Shahenshah of Bollywood – Big
B – and its swift climb up the ladder in the Textile Industry
Mumbai, 12th June, 2019: Having set new benchmarks in the world of Textiles, power brand ‘GRADO from The House of GBTL and OCM’ has charmed the premium fabrics segment with its specialty of amalgamating modern technology with the tradition of making fabric. To commemorate its success, the brand organized
the ‘GRADO Super Shahenshah Meet’ to celebrate its meteoritic rise in the Industry and its association with their brand ambassador, none other than the ‘Shahenshah of Bollywood’, Mr. Amitabh Bachchan. 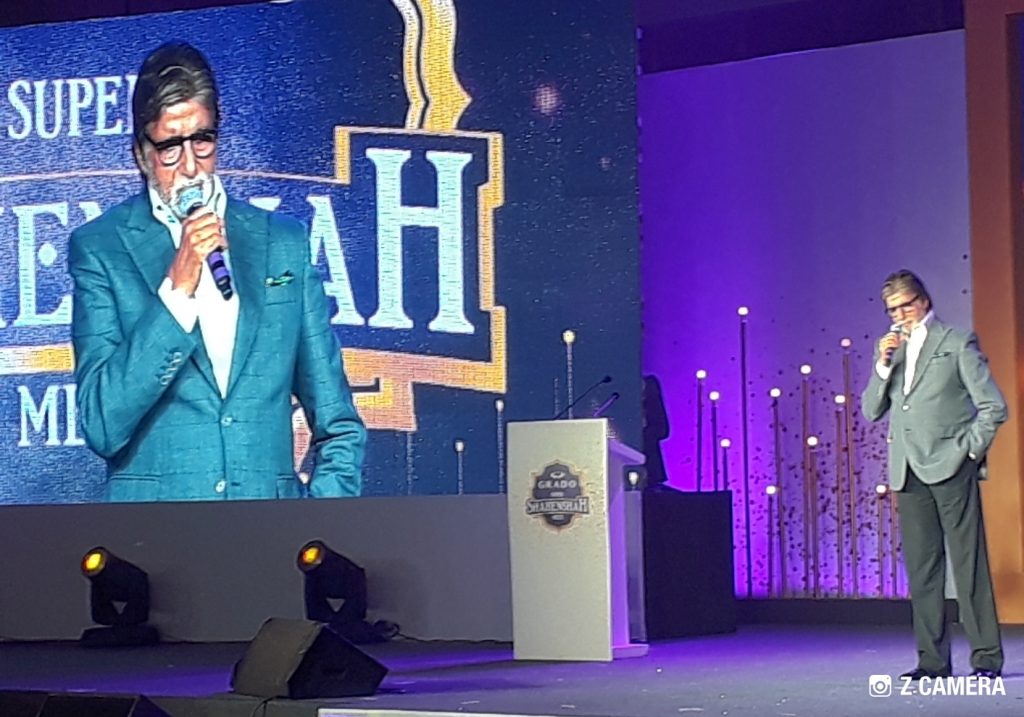 The event took place at Hotel Sahara Star, on 12th June, 2019, 6 pm onwards, with over 1000 + dealers, retailers,distributors and wholesalers, from across the country, in attendance.
The main objectives of the event included the ‘Meet and Greet’ session to award the winner of the ‘GRADO Dekho, Big B se Milo’ contest; recognition and felicitation of top performers, in several categories, for the
revered houses of GRADO – GBTL and OCM and celebrating its association with Big B as their Brand Ambassador. 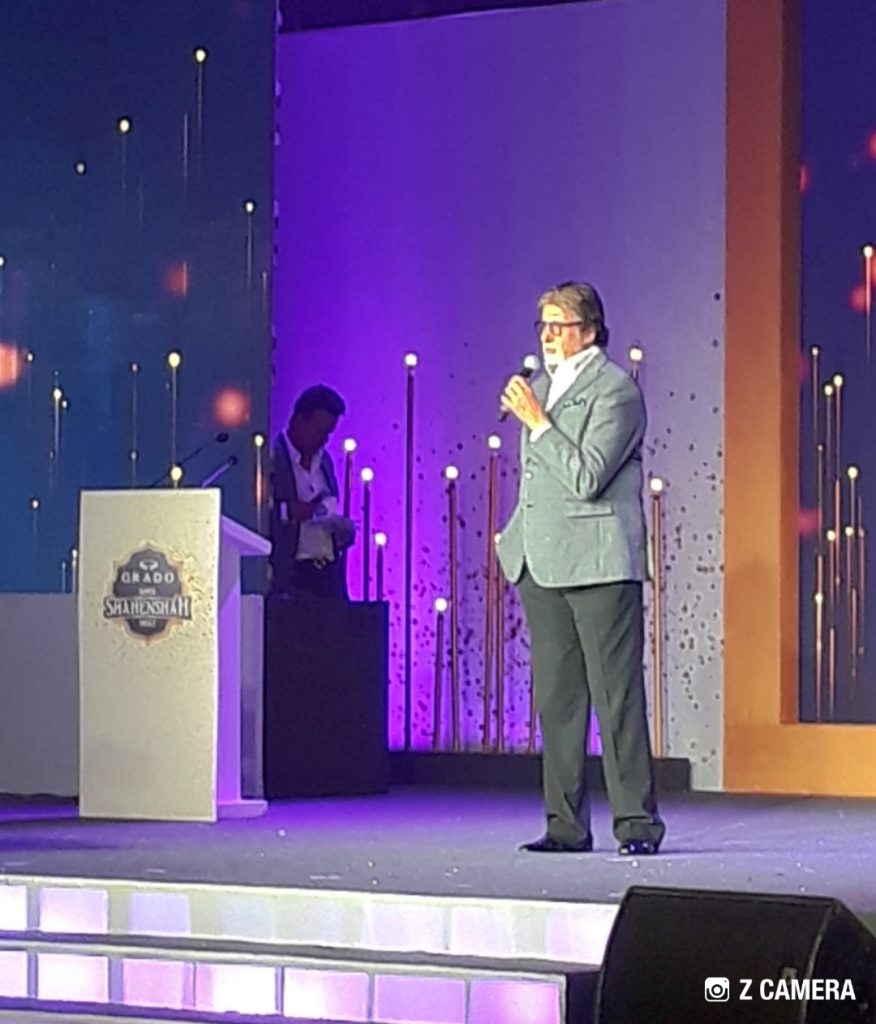 The function began with a tribute to the Chairman, followed by a riveting speech by Mr. Rajendra Agarwal,Mentor, GRADO. This auspicious occasion was marked by the Lighting of the Lamp as well.The stage was then taken by Emcee Siddharth Kanan, top Indian television and radio host, who began his evening with the gathering on an inspirational note via a ‘Mirror activity’, which portrayed that each one of them is the reason behind GRADO’s phenomenal rise in the Industry. 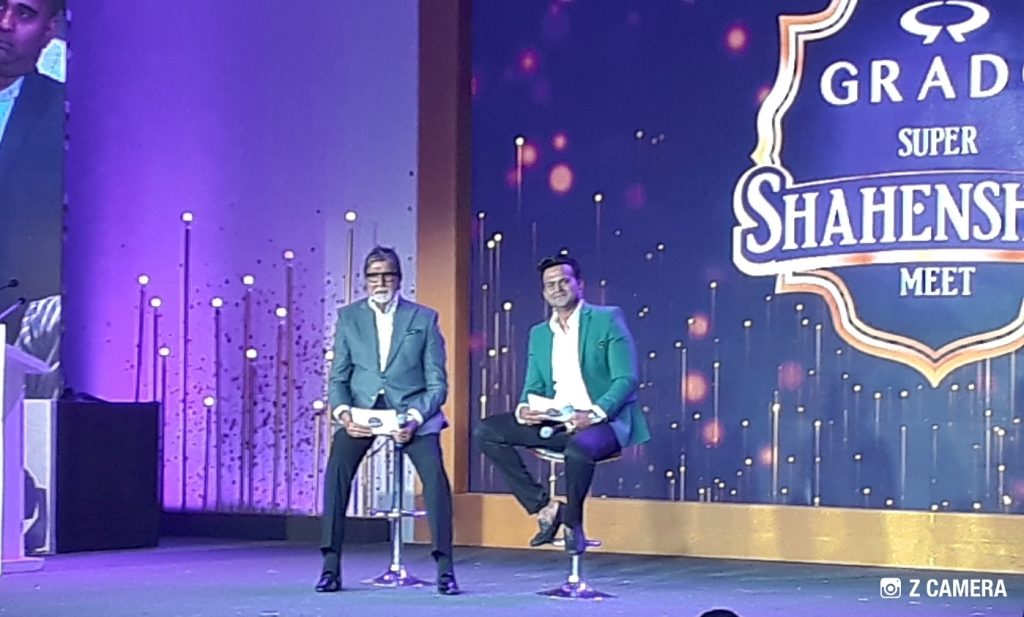 To get a fun glimpse into the Top Management, the next segment was ‘Rubaroo with GRADO’, a chat-show based format, wherein Mr. Kannan interacted with the GRADO team via an informal banter, thus enabling the audience to get to know them like never before. Along with witty quips and informal conversations, the
team shed light on new areas being explored in terms of product and channel, how the Gen Next is taking the legacy forward, key associations and more. 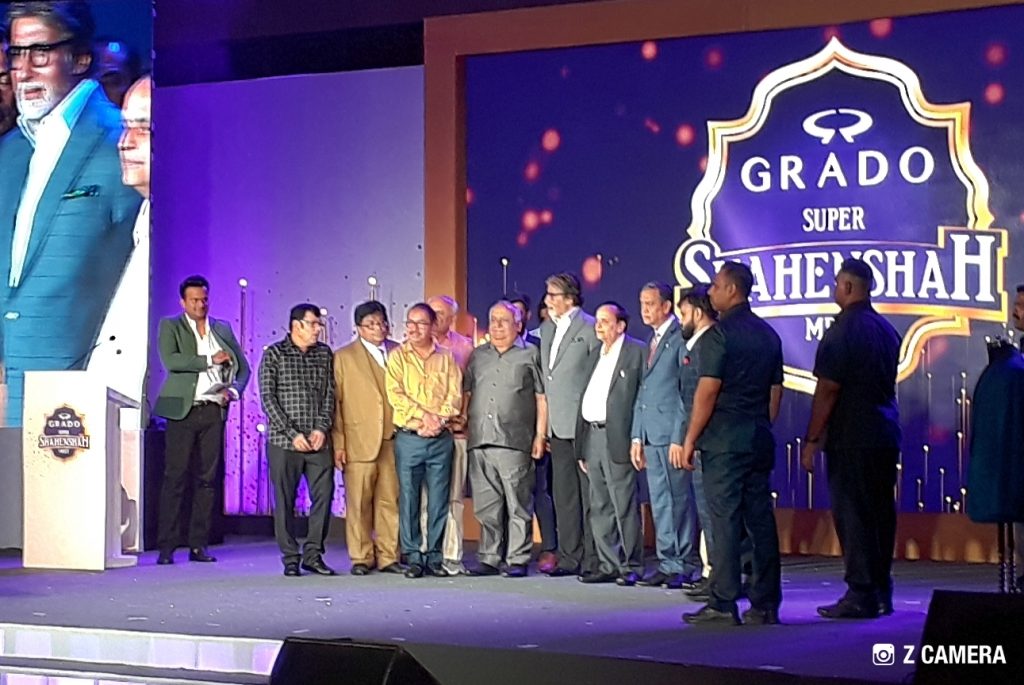 It was thoroughly enjoyed by everyone gathered at the
venue.Having interacted with the team, it was now time to acknowledge and recognize the phenomenal work
done by GRADO’s biggest stakeholders – wholesalers and retailers – from the Central, West, East and South Zones across the country for both GBTL and OCM.
The first set of awards was ‘Best Zonal Performers for Grado’, with 9 winners from OCM and 10 winners from GBTL. This was followed by a wonderful dance performance that captivated the audience. 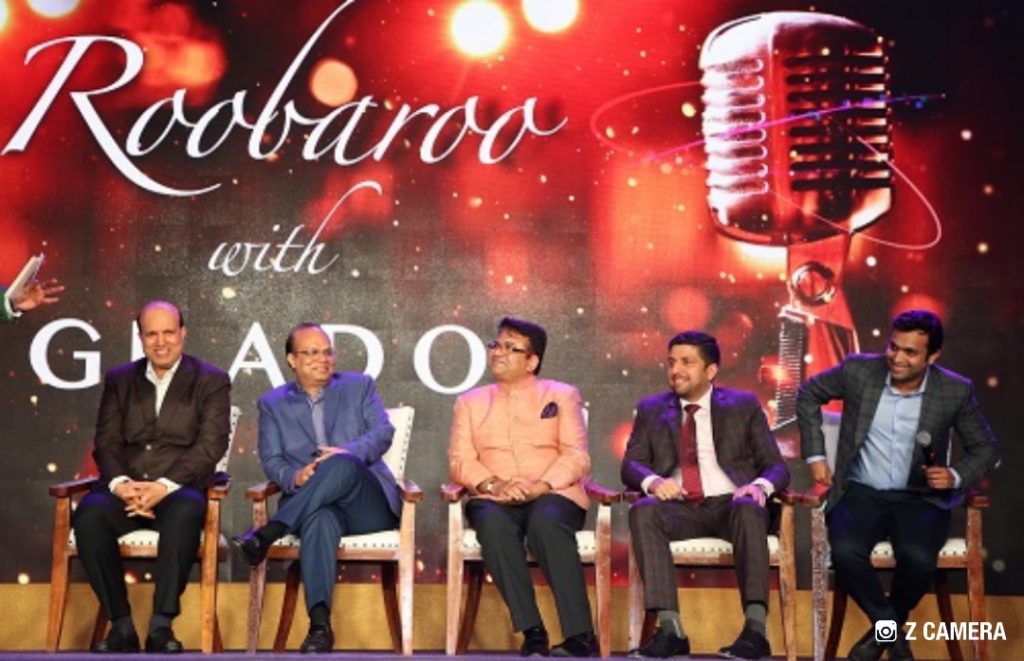 The second set of awards was ‘National Excellence Awards for Grado’, with 10 winners from OCM and 11 winners from GBTL,
with all the winners receiving enormous rounds of applause from the gathering.
The delightful evening proceeded as Mr. Kannan’s interacted with the audience via fun question rounds,which was a prelude to the arrival of the Star of the event – The Shahenshah of Bollywood – Mr. Amitabh Bachchan.
Amidst all the happiness and cheers of the crowd, Mr. Bachchan was felicitated onstage by Mr. Rajendra Agarwal, Mentor, GRADO. Following this, the former indulged in a candid conversation with the audience seated at the event. After an engaging session with the crowd, it was time for an enjoyable quiz titled ‘GRADO
ke GYANI’ for all the retailers and wholesalers present at the event, with Mr. Bachchan being the Quizmaster and Mr. Kannan being the Moderator for the same. We had 6 lucky guests who were questioned by Big B himself about Grado and the whole crowd was in all cheers. This was succeeded by the “Sawal Aapke , Jawaab Big B Ke” , wherein Mr. Kannan asked Mr. Bachchan to answer few select questions by the audience, to know more about his association with GRADO as its brand
ambassador, his journey with the team and more. To add to this blazers were signed by Mr. Bachchan himself at the event.
Post this, it was time to accord the lucky winner of the ‘GRADO Dekho, Big B se Milo’ contest, wherein Mr. Bachchan himself presented the award, a brand new car, to the awardee, Mr. Rajeev Arora from Jodhpur,
by handing him the car keys.
The celebratory note continued with the ‘Lifetime Achievement Award’ presented to Mr. S. Krishnamoorthy for his invaluable contribution and role in the ascending growth of GRADO and the industry.This was followed by GRADO’s Top Management team delivering the ‘Vote of Thanks’ for Big B, which was then succeeded by ‘Drum Circle’, an energized drumming session for the audience. The eventful evening
came to an end with Mr. Kannan announcing the finale act of the day – another mesmerizing dance
performance – followed by the DJ taking over the stage.
Speaking about the grand success of the event, Mr. Rajendra Agarwal, Mentor, GRADO said “When we introduced ‘GRADO from The House of GBTL and OCM’ in 2018, we knew that it would do well in the market
but its magnitude has surprised all of us, in a good way! From strategic associations to excellence in the departments of product deliverances and processes, a lot has been achieved in such little time, which is a clear indicator of how it is going to be in the coming months and years as well. To commemorate its well-
deserved accolades, and our wonderful association with Mr. Amitabh Bachchan as our brand ambassador, we hosted the ‘GRADO Super Shahenshah Meet’ for all our dealers , retailers and wholesalers from across
India. The event was a grand success and we look forward to having more of such events, to come together for GRADO’s ascension in the Industry”
Emphasizing upon the contribution of the stakeholders, Mr. Vikram Mahaldar, Managing Director, OCM said“Our brand, GRADO, has come a long way in a short period of time and this would not have been possible
without the strong relationship with all our stakeholders. This has been built on the foundation of trust between the company, our channel partners and the end-customers; driven by quality, innovations, product
extensions and unique marketing initiatives. The event further strengthened GRADO, as a brand. I can say this with utmost confidence, that all our retailers and wholesalers were thrilled and went back with a positive and
refreshed spirit and this should lead to a substantial increase in market share.”Speaking about GRADO’s success, Mr. Dhruva Singh Chauhan, Whole Time Director, GBTL said “It’s amazing
to see how GRADO has made its presence felt in a short span of time. The Grado offerings of wide range of latest Designs , trendy Colors and above all unmatched Quality & SMOFT ( smooth & soft) Handle has truly WOWED the consumers. Grado will remain proactive in ensuring that its customers get the best of fresh fashion 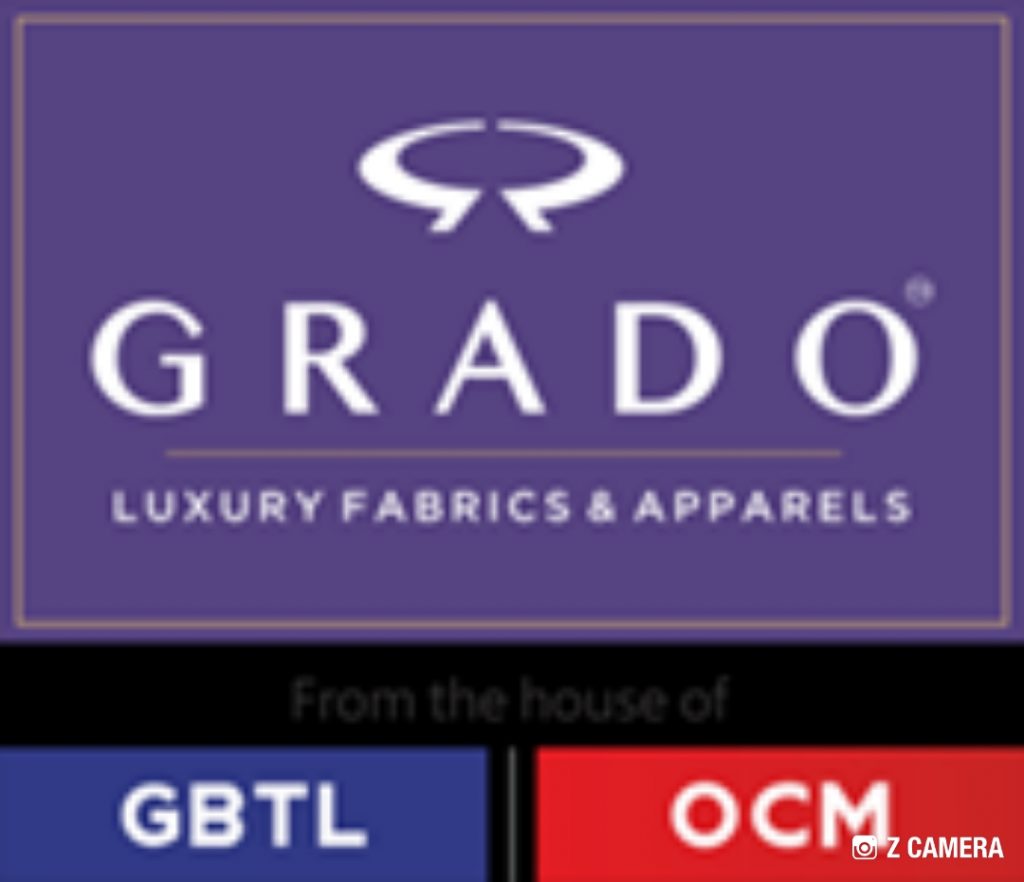 fabrics every day and make them stand taller. Our super team of designers and weavers are always breathing innovation and uniqueness and will continue to do so to ensure Grado remains The SHEHANSHAH Of Fashion!”
Speaking about his journey with GRADO, Mr. Amitabh Bachchan, Brand Ambassador, GRADO said “I have always endorsed brands that I truly believe in, and when the GRADO team came to meet me with the fabrics, I took time to agree to become the Brand Ambassador but I will have to admit that today I feel proud to
associate.. Products come in such classic colours, innovative textures and patterns, hence making it versatile in nature. The brand’s tagline, ‘Aap bhi Grado Peheniye Ek Baar, Phir Yeh Hi Pehnenge Aap Baar Baar’ hits
the bulls eye because once you try their fabrics, you won’t feel like buying any other. I congratulate the entire GRADO team for the spectacular growth pace in just over a year. It is my honour to be associated with such a premium and prestigious brand and I look forward to doing more of such events with the team.” Currently, GRADO’s latest Cotton Collection, which is available in 10000+ stores, has already won the hearts
of consumers across the country.
About GRADO by GBTL and OCM
GBTL & OCM, two heritage brands, have launched a New-Age Brand called ‘GRADO’. With the advent of
‘GRADO’ and the combined star wattage of the greatest celebrity of Indian cinema, Mr. Amitabh Bachchan as the Brand Ambassador, Brand ‘GRADO’ is all set to usher a successful new wave in the Luxury Fabrics & Apparels industry. GRADO caters to maximum product segments and across a range of price points so there is something for
everyone under the brand name ‘GRADO’. From an end-consumer viewpoint, the composite Power Brand ‘GRADO’ offers a rich repository of fabrics and apparels to choose from, namely, Wool, Wool blends, PV, PV blends and Cottons.