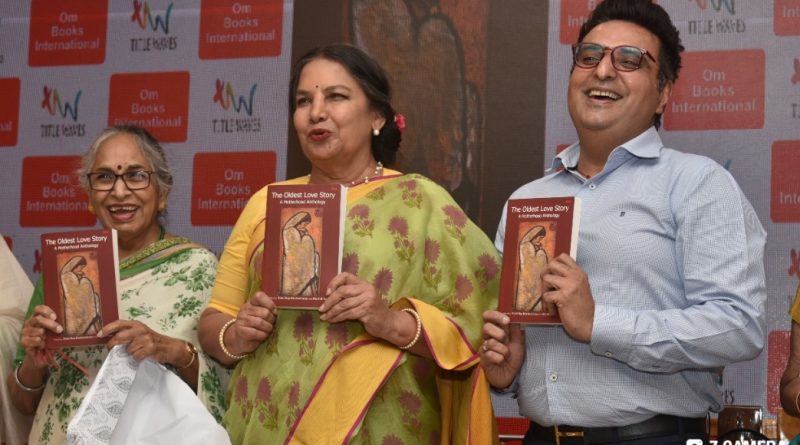 Legendary actress Shabana Azmi looked radiant Inna cotton saree, her Ile and laughter resonated Title Waves when she spoke of her beautiful relationship with her mother Shaukat Azmi at the launch of Om Books’ The Oldest Love Story, published by Ajay Mago. 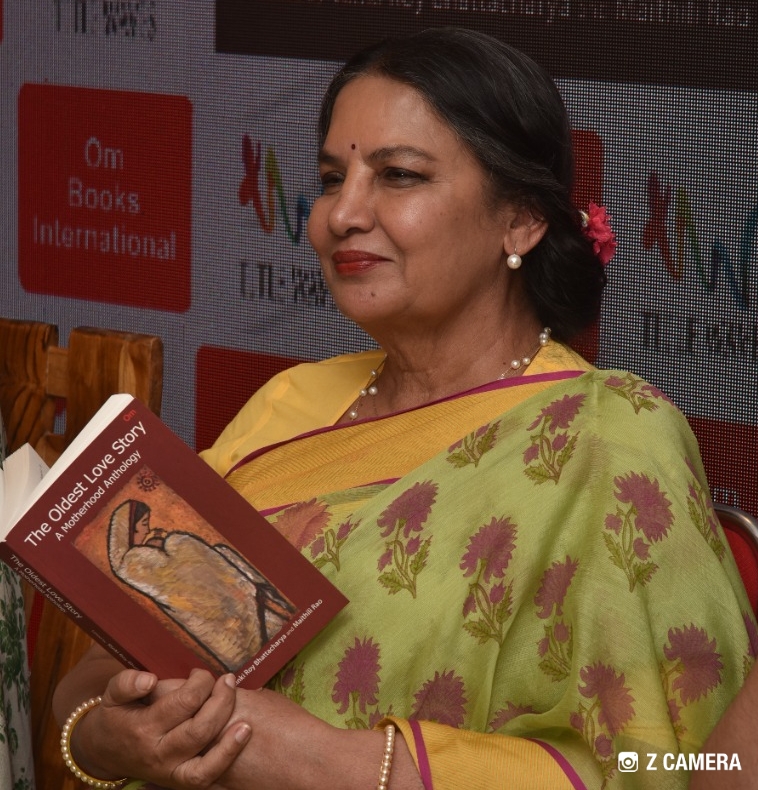 The UNPFA Brand Ambassador and Padma Bhushan awardee Shabana Azmi expressed her happiness in being part of the authors of the collection of extraordinary essays depicting the theme of motherhood.
In this book, Shabana Azmi has penned interesting anecdotes of her relationship with her mother. Published by Ajay Mago, edited by Shantanu Ray Choudhury, co-edited by Maithili Rao and Rinki Roy Bhattacharya, the book is one-of-a-kind literary gem. 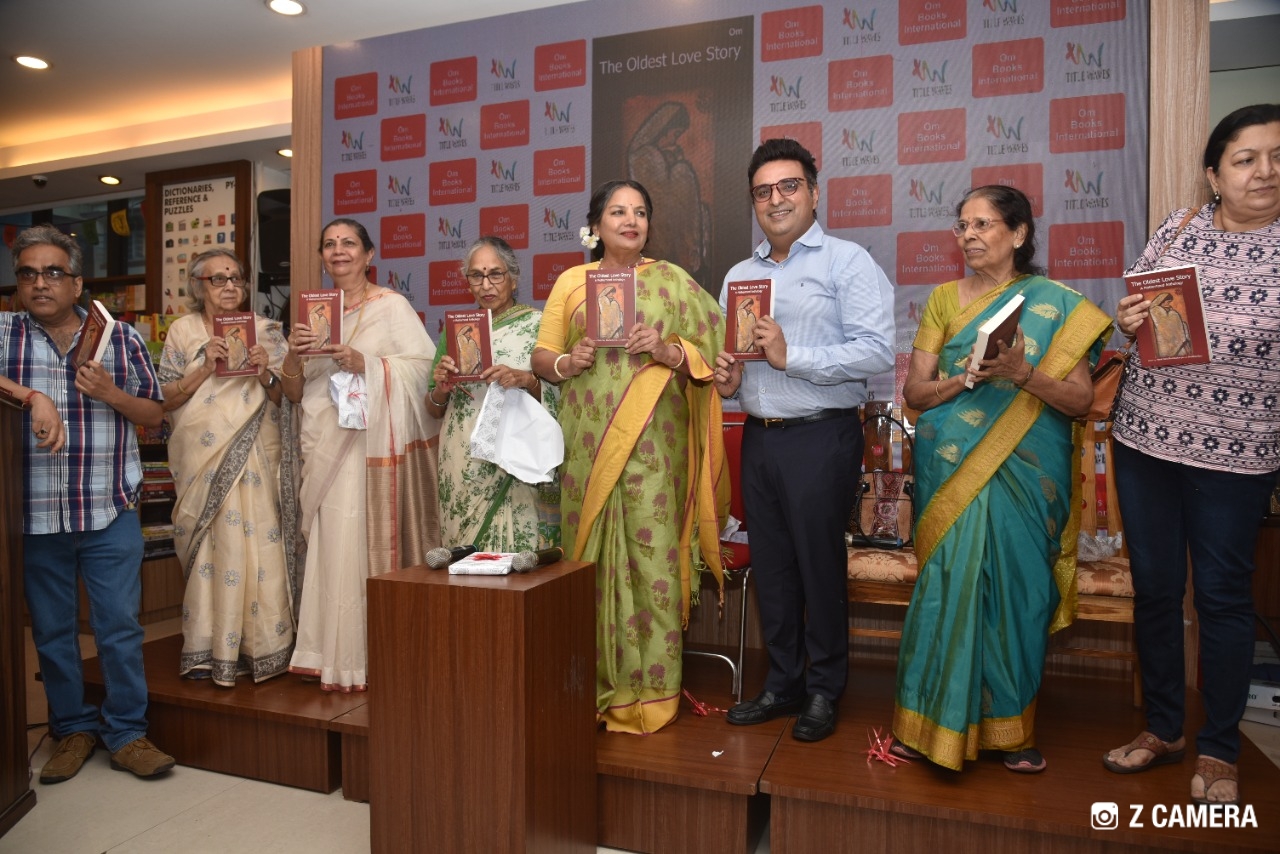 Says Shabana Azmi, “my mother never minced or sugarcoated her words. She kept an amazing balance between her professional and her personal life. And she definitely was not the Nirupa Roy type Bollywood maa. She used to express her point in a very straight forward matter-of-fact way. When my first film Ankur was released, my mother was sitting in the front row ahead of me. After the film, she turned around and said, ‘Shabana, you are a very good actress,l. I am proud of you. This film is very good.’ I was very confident after listening to my mother’s words. 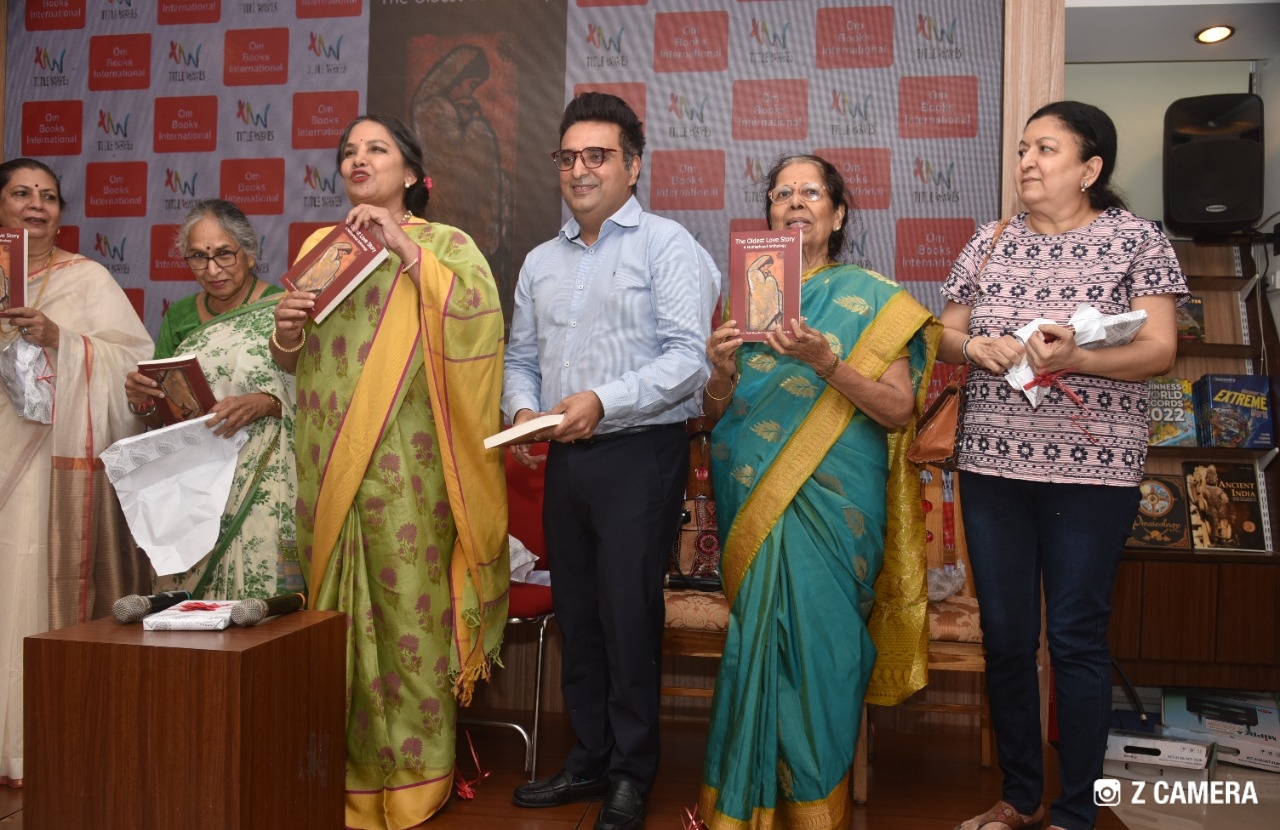 When my second film Faasla came after 2 months, she was sitting ahead of me. And in the same manner, she looked back and said in front of everyone, ‘Shabana, this is such a bad film and you have done such a bad job. If you had shown me this film earlier, I would have got you married off to some random handicapped man, but would not have not let you act in the film industry!’ She was just straight forward.”

*Shabana Azmi’s grievance on how her Mother liked brother Baba Azmi over her!*

Shabana Azmi also speaks of how at the age of 9, she used to behave very rudely with her mother Shaukat Azmi. She says, “There was a time when I often behaved very rudely. Once my mother called me and asked why am I behaving like this. I told her that I think she loves my brother Baba more. She replied simply, ‘Shabana, ‘I am your mother but I am also a human being. Your nature is rude and unpleasant and I do not like the rude you. Your brother is very loving, good natured. That’s why I treat him well.’ Hearing this, I left my rude behavior once and for all.”

Shabana Azmi smiles and suggests to the parents of today, whose children may speak very rudely, that they need to follow Shaukat Azmi.

Other than Shabana Azmi, writers of India like Kamala Das, Shashi Deshpande, Nabanita Dev Sen, CS Lakshmi, Vaidehi, Mannu Bhandari among others have shared anecdotes of their relationship with their mothers in the book.